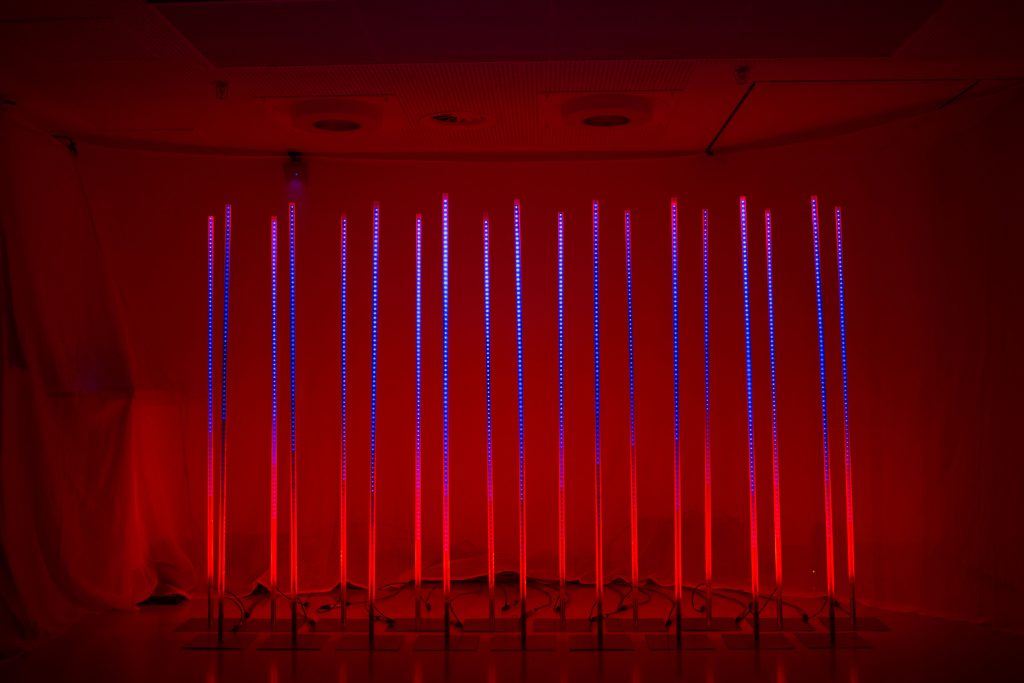 Flatpack Festival asked me to become Artist-In-Residence in the Photonics Department of Aston University, to make a response to the work they do there. My piece would appear in the run up to Birmingham Library’s Light Fest, as part of an all-day event highlighting the research work of the Department which featured lectures and demonstrations.
Initially I planned to make a laser-based piece, however considering the health and safety implications of this (not to mention the hundreds of school children likely to be in attendance) I decided that using LED’s would be a much safer option instead.

All the demonstrations were based on the physics of light, colour mixing, refraction etc. which inspired me to create a more visceral piece : something to make you feel light, to perceive it and its effects on the brain.
To do this I made some 1.5m light probes from translucent tubes which featured 170 individually controllable pixels; 85 to the front and 85 to the back. This gave me the ability to control both the direct and the indirect light which bounced off the surface to the rear of the tubes, which meant I could separately colour the background and the detail.

My initial plan was to create an interactive piece but as I added audio it revealed a further layer which I decided to experiment with. I took the frequencies of red, green and blue light and dropped them down many octaves so that they became audible. I then used the activation of the red, green and blue pixels to control the volumes of these frequencies. I wondered, could it perhaps be possible to perceive colours through sound? I discovered that the combination of this audible droning of the frequencies combined with a slow colour change produced a very powerful emotional effect akin to someone switching on a “calmness switch” if you will. In this state one became very ‘present’ and indeed during the event many people commented that they felt like they had stepped into a different world.

I further refined the audio by adding some sub octaves to the frequencies, fine-tuning the effect and experimented interplay between the fore- and background illuminations until I was happy with the effect.

I feel like I have come full circle to the beginning of my interest in light in that I am again hand constructing light experiments. I now have the kind of technology I could have only dreamed about 20 years ago. I intended these probes to be multifunctional, and I intend to continue my investigation in other kinds of spaces through the exploration of minimal colour fields and more kinetic installations.

This has now been shown at Seeing Sound festival at Bath Spa university (#2) which was a fascinating weekend of audio visual performances and academic papers, and Flatpack10 (#3) where it was described as “Chris Plant’s installation ‘Frequency Response’ drew on correspondences between colour and music theory to create a soothing, subtle blend of light and sound.” by Fluid Radio